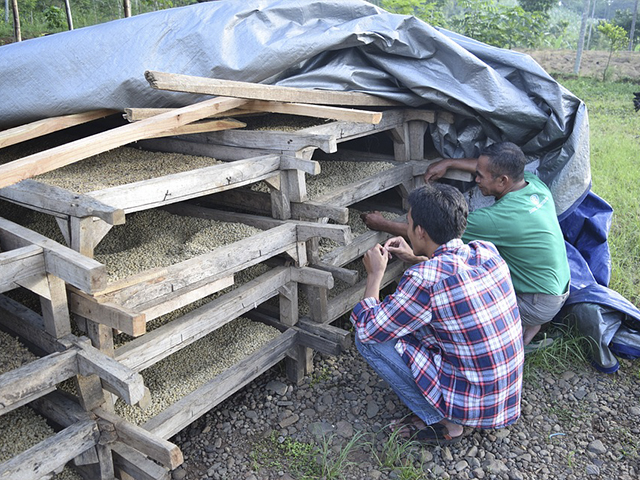 Well I have been roasting coffee for over 20 years now and gone to look at coffee in over 20 countries … I guess I figured it was high time I go to Brazil. The trip got off to a rocky start. It seems since Sept. 11th, we have been making it difficult for Brazilians to enter the United States so Brazil decided to do the same to U.S. citizens. After having my visa application refused at the consulate in Los Angeles, it became apparent that the only way I would be allowed to go is if I first flew to L.A. and applied directly. This meant leaving a day early and staying overnight in the downtown area in order to get to the Counselate by 8 in the morning. So my 20 hour flight time to Sao Paulo turned into 35 hour flight time with a L.A. detour.

First of all, Brazil is a vast country, They produce almost half of the worlds coffee on their own. This year’s figures are being thrown around at 60 million bags. That is a staggering figure. I flew up to Vitoria in the Espiritu Santo region which grows about 20% of this total. In my journeys into the interior, I saw impeccably kept fincas (farms) terraced up very steep hillsides. The coffee was grown tightly together and yields were greater than I have ever seen before.

Based on my old knowledge of wine, this is not always a good thing for flavor. There is a certain complexity and subsequent intensity in flavor gained when the coffee (or the grapes) have to struggle and take longer to grow. Sometimes drought conditions yield smaller crops but the quality is better. Over the last 20 years that I have been buying Brazilian coffee, I have seen the quality increase significantly. Given the huge growing areas here, it is inevitable that there will be a lot of mediocre coffee produced. This usually goes to eastern block countries or is consumed in Brazil. The finest quality goes to Europe and the United States. Anyhow, I was impressed with their agricultural techniques. Their approach to picking is different from other parts of the world. There is basically one harvest and the trees are stripped. Given the huge quantities and limited labor supply, I guess this is the only way for them. The aftermath looks pretty devastating but the trees recover. This was also a first for me is seeing robusta coffee in huge quantities. We would drive up vast valley floors from the Atlantic ocean and see the robusta growing say between 2000 to 3000 feet. Then the arabica would be seen above.

In many countries I visit, there is poverty evident all around me. this was not the case in Brazil. I am sure there are many tragically poor people here but not in the places I visited. Definately some sections of the big cities like Rio and Sao Paulo are very bad but for the most part I saw well constructed buildings, tastefully done and very healthy active people. I stayed in a couple locations along the ocean and was amazed at how many would be walking, running along the beautiful shoreline. And how many would be playing football (soccer), volleyball or surfing. From ages 10 to 80 they made being healthy and looking fit a big part of their lives. All in all, Brazil is a vast spectacular country with high energy and strikingly beautiful people. I look forward to the opportunity to visit again and learn more.